How will virtual reality transform the arts?

Virtual reality is opening up a world of possibility for the creative arts. TechWatch editor Emily McDaid reports from 4IRC.

The latest 4IRC debate took place on 22 May at the Queen’s Film Theatre, Belfast. During the event, attendees were able to put on a virtual reality (VR) headset and experiment with Tilt Brush and other VR experiences.

“Immersive tech has the ability to change the way we create and experience content,” she said.

“Goldman Sachs estimates that the VR market will grow to $95bn by 2025.

“VR opens up possibilities in the creative arts.” 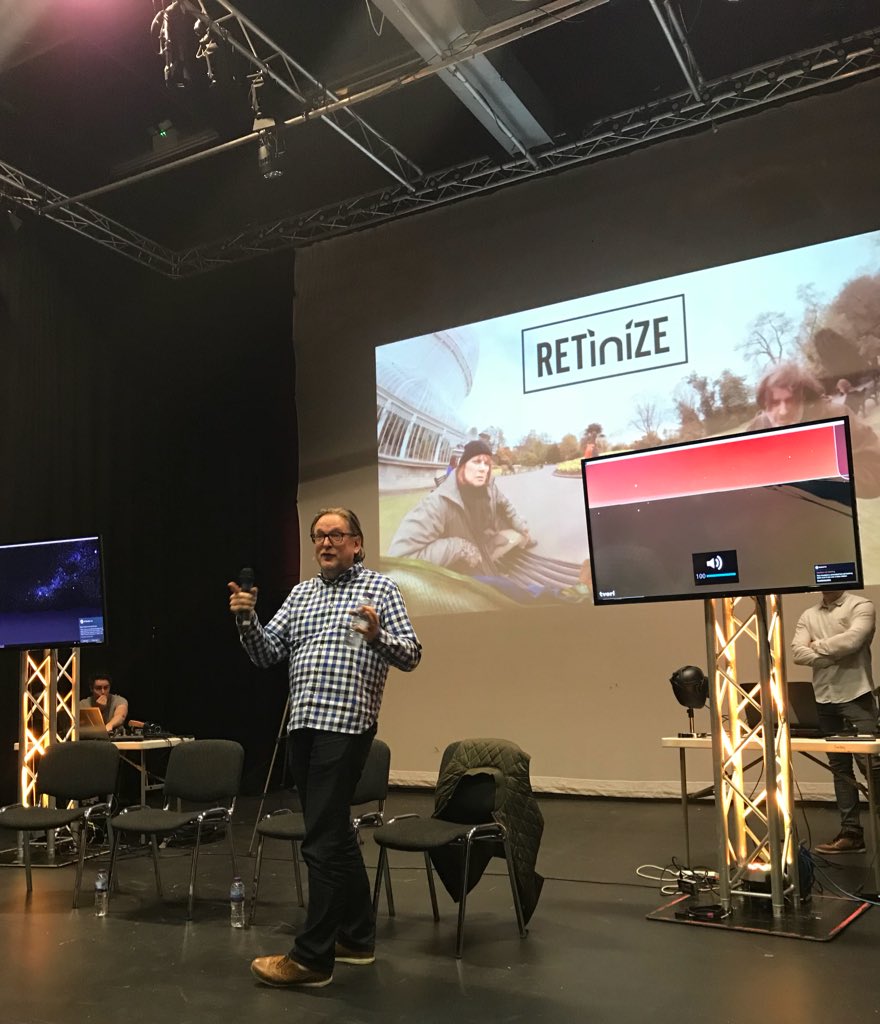 Phil Morrow began with a summary of Retinize, covered here in a previous TechWatch article.

He said: “VR is the most exciting medium to launch in our lifetimes, and possibly the last new medium because it encompasses everything.

“We’re not a tech company, we’re a creative company. We work with everyone – artistic projects, corporate, broadcasters, charities etc.”

Regarding the evolution of VR, Morrow said: “It is possible that people will get together in large groups to watch VR. Facebook’s big goal is for people to put on headsets and hang out with their friends. At the moment, it’s mostly solo watchers.”

He described some of the latest VR headset technology.

“You have six degrees of freedom with headsets like the Oculus Rift and HTC Vive, ones that allow you to move around and interact with the content in front of you. It can be expensive and you’re tethered.

“Looking very far into the future, you could have a contact lens with images painted on.

“With cinematic VR, you don’t walk around – you’re in a fixed position.”

Turning to how VR can transform the arts, Morrow said: “VR is great at putting people in a seat for events. With live performance work, theatre, dance etc, you have the event and then it’s gone. But with VR, you can watch it again from the best seat in the house.

“This is going to be incredibly important for dance, ballet, Circue du Soleil – any live performance.”

Morrow pointed out how you can also create art in VR. Tilt Brush was demonstrated, making 3D art that you can walk into and around. Tvori was also demonstrated to record animations. “For example, a theatre director could design a space before they actually build it.” 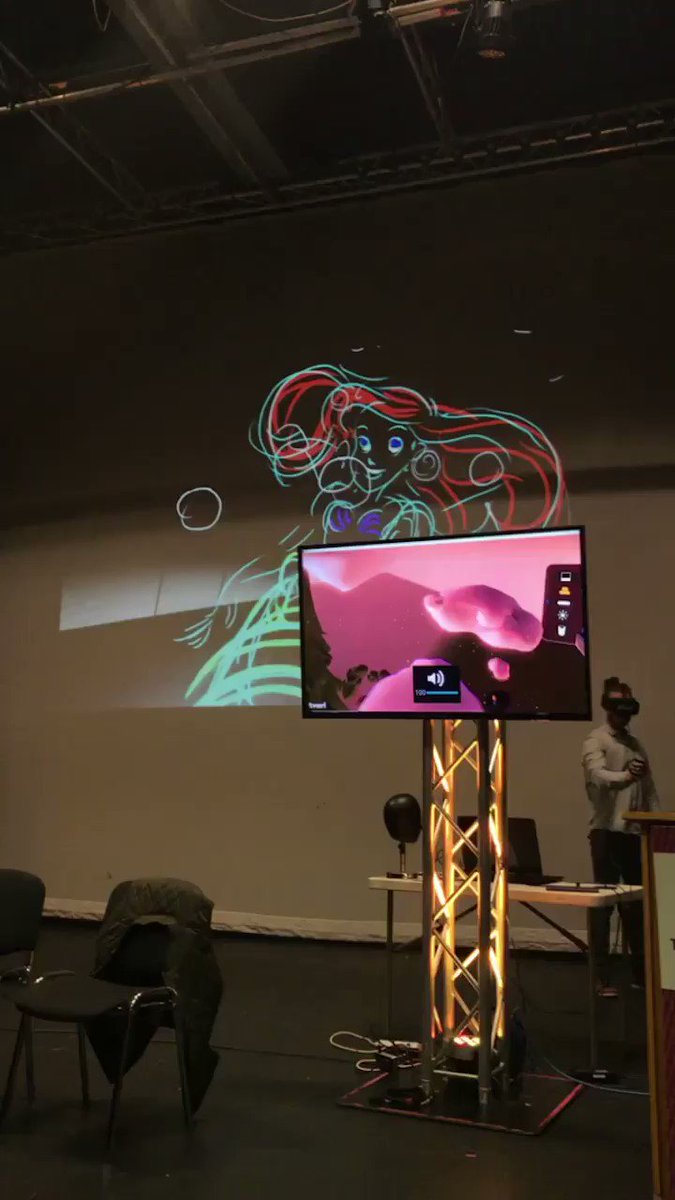 “Sometimes in VR, you can see through the eyes of a viewer or sometimes you’re a floating ghost – there are no rules; for instance, will you accept someone else’s narrative voice as your own voice in your head?

“All mediums require people to go along with it. When TV first came out, people through they could climb into the TV.

“VR has the capacity to make people emotional to have new experiences, to take people into spaces that are difficult.

“There’s creative opportunity, and there’s money to be made.” 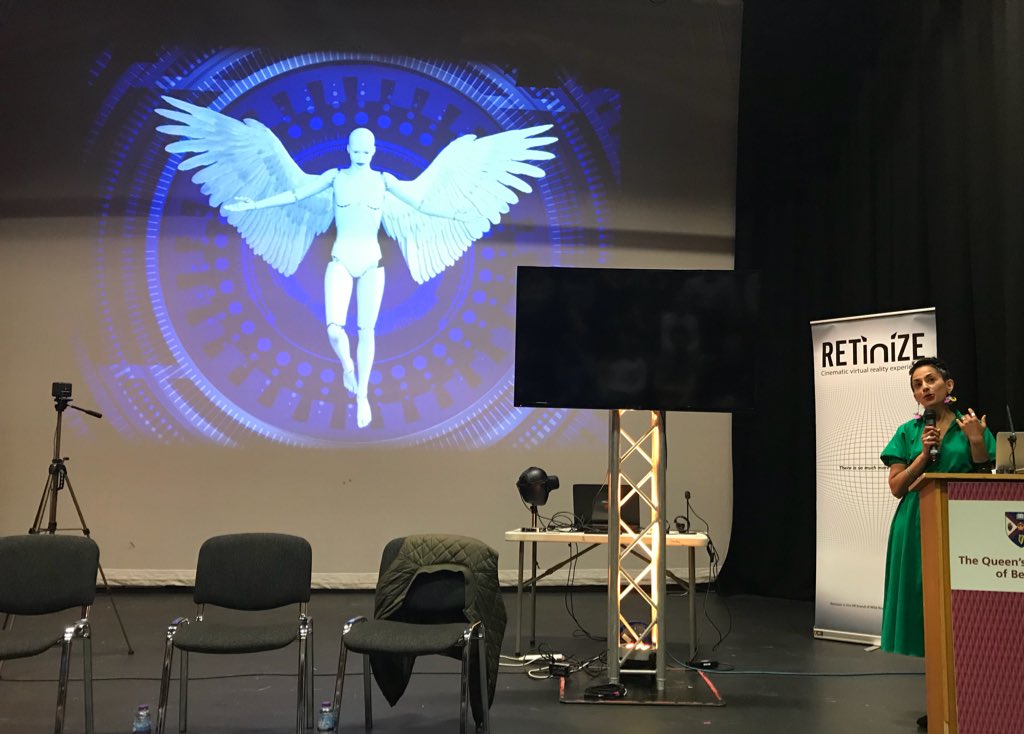 Next up @deepamann_kler talking about the need for a change in mindset towards #VirtualReality and the excitement of a new way of working. #4IRC

“I think the more relevant question is: will creativity transform technology?

“As automation increases, more and more tasks that are mundane are being taken away from humans. Where does the real value in human beings lie?

“One of the answers is our creativity, and it will be very difficult to replicate that.

“I get the feeling a lot of creative people are blindsided by how much technology can allow now. It’s a completely new language and one that we’re only just beginning to find our feet with. We need to be out of our comfort zone, working in multidisciplinary teams – creating, prototyping and testing, and going through that cycle.

“VR is already showing up in museums – the Tate Modern did an exhibit with Modigliani and HTC Vive. But what are the implications?

“I love VR, but I have issues with the fact [that] half your face is covered and it’s a solo experience. It’s also a really expensive medium. The Tate exhibit was very expensive to produce. For laypeople, it can be confusing, all these different headsets. Phone-less headsets are very important developments. But why is it still worth it?

“Because it’s so powerful at tricking the brain. Therapeutic applications – helping reduce chronic pain – have the capacity to rewire your brain in a process called neural plasticity. These are some really interesting areas where I think much research will be happening.”

Mann-Kler gave an overview of her VR applications for pain relief, covered here in a previous TechWatch article.

“Inherently, humans are social creatures. I think the most popular VR apps will be ones that you do with friends.

“VR will not be around forever. I think it will be gone in five to 10 years, but the groundwork and experimentation will be done that will be very important.” 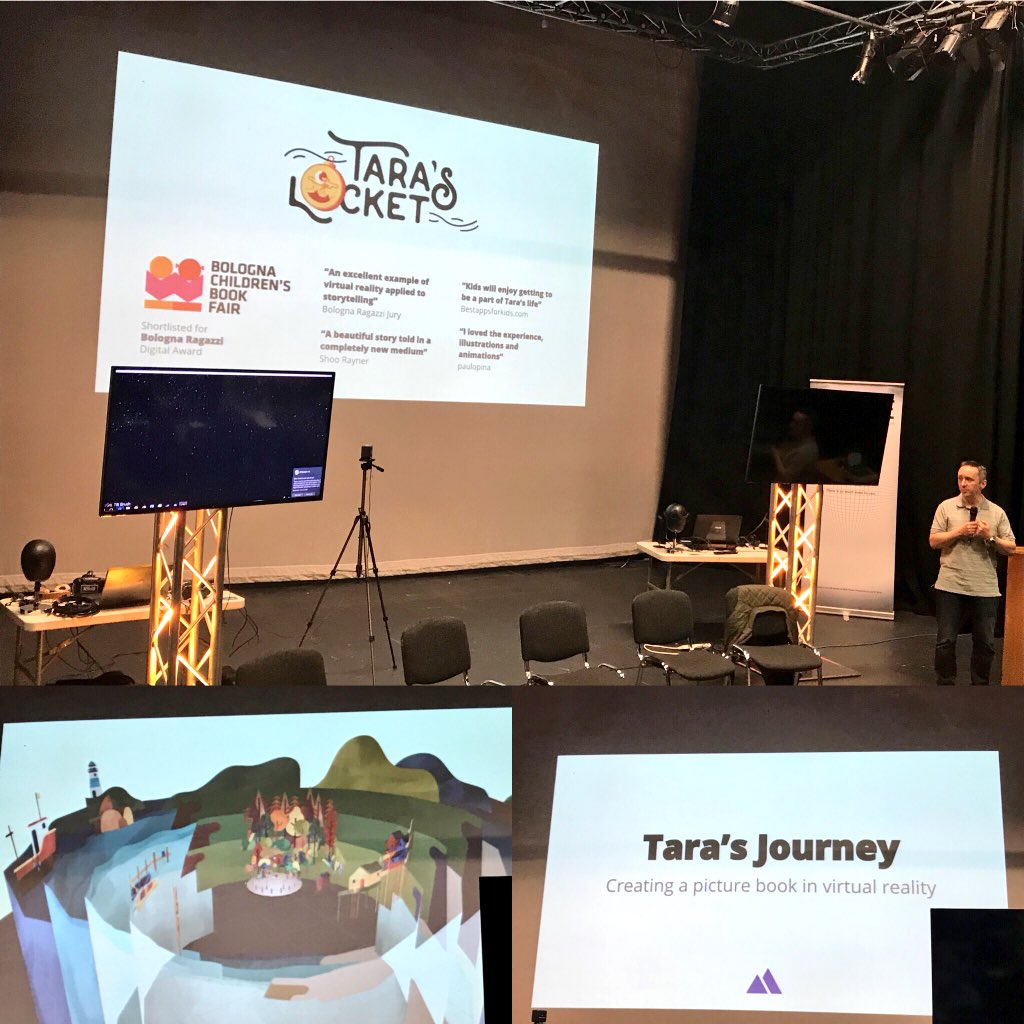 “We asked ourselves, ‘How might we reimagine kids’ favourite stories as an immersive experience?’

“To create Tara’s Locket, we developed a story based on the idea that control over your environment could be leveraged for the power of good. It was a nice message for a children’s story.

“With VR, your perspective is different; we can do things we can’t do in real life. What Patrick Swayze can do in Ghost is very like what you can do in VR.

“We thought of the stage as a world, as a round stage. We storyboarded in 360 degrees. Google has put out a lot of material on VR storyboarding.”

“Sound is very important and often overlooked. There’s 3D spatial sound, creating audio environments. It requires thinking about scene from a visual and audio perspective. Directing your viewer’s gaze is the first thing you do.

“We’ve learned a lot and won many awards for Tara’s Locket. The one thing that we didn’t face in any shape or form was any sort of critique. There are no challenges; we were able to do what we wanted. Nobody has really thought through the implications of VR.

“The tech here is amazing but it’s nowhere near the level that it takes to get mass adoption.”

He discussed his wariness at allowing the VR community to develop unchecked. “We don’t want a situation where we’re asking, ‘How did we let that happen?’

“I’d be keen to hear how people think the world of the arts can moderate the future. Artists have a responsibility here. Do we want a strange dystopia where everyone looks through their contact lens instead of engaging with others?” 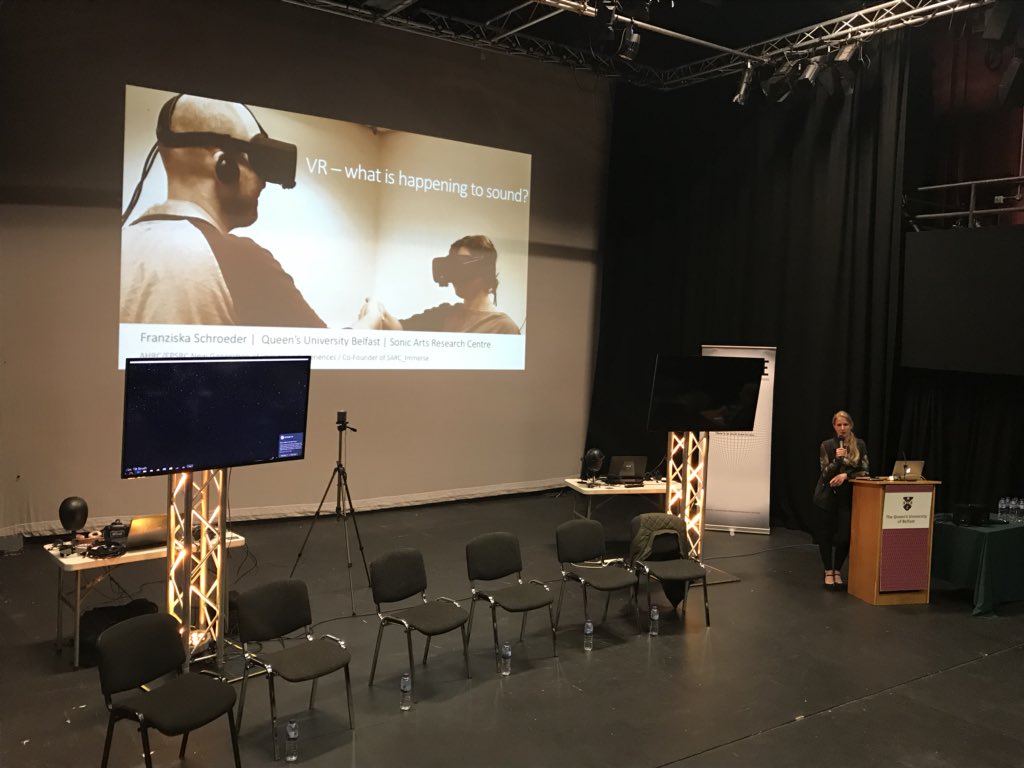 Dr Franziska Schroeder is an expert in distributed listening. She began by asking the audience to spend 30 seconds with their eyes closed, just listening.

“I’m a musician. I play saxophone, so listening is a big part of my job. We are obsessed by vision; we live in a visual world. Sound is often a final thought, so I’m going to make a case for sound and listening.

“Sound is all around us. It’s the most immersive sense. When we close our eyes, we get more attuned to things around us. So, of course I’m asking why sound isn’t crafted the same way visual material is.

“Immersive, high-quality audio is an emerging medium. IDC is not conservative with its estimate of how big the VR market will become – $143bn in two years.

“’Til now, vision has been flat – the cinema screen is in front of us, whereas sound is always around us; it’s much more immersive.

“The other parallel question I have is, this idea of virtual. I think VR goggles box us into something quite small. Our bodies become vulnerable. It’s a multisensorial experience. You can become a digital captive, if someone leaves you there.

“Will these immersive or VR technologies transform the arts? I want to rephrase: quite a few of us in this space who design VR, we might be in a process of replacing ourselves as humans.

“Gabo Arora made a VR movie called Clouds Over Sidra – a VR piece about a 12-year-old Syrian refugee … He was questioning how these new mediums allow a new grammar of storytelling and emotions.” 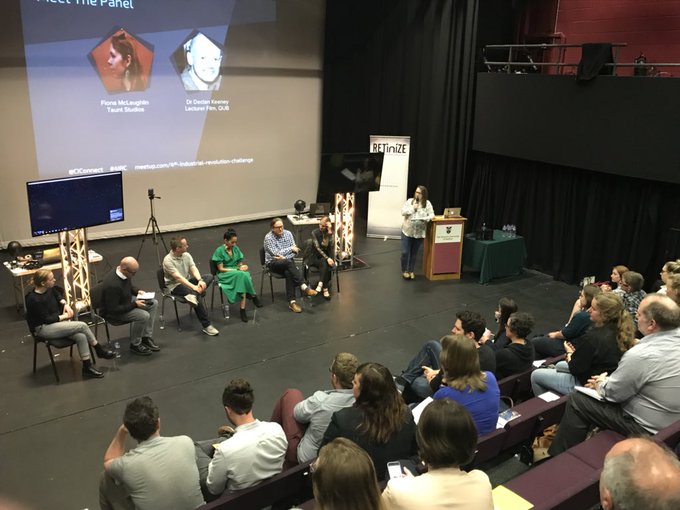 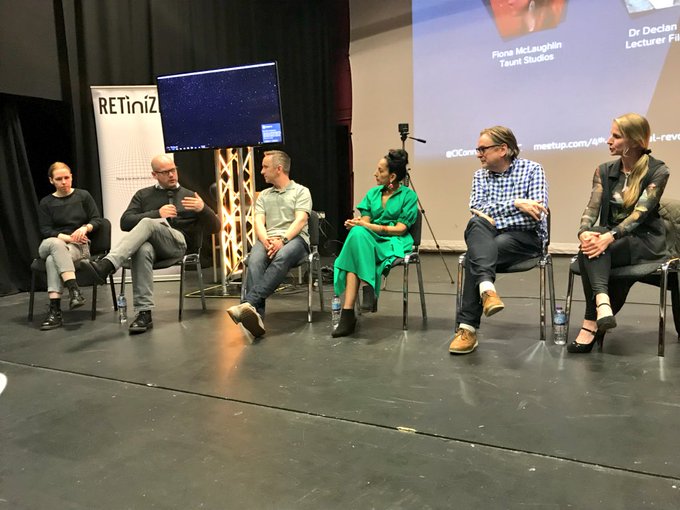 The speakers were joined for a panel discussion by Fiona McLaughlin of Taunt Studios and Dr Declan Keeney, head of QUB broadcast production.

Keeney: “VR is so new, it’s interesting to hear perspectives from other disciplines. There’s an analogy all the time about VR and early film. I don’t know if VR has a five-year life or 10-year life but I certainly think it’s iterative.

“It’s a really interesting thing, how we monetise VR. Professional artists need to be paid for what they do. With Tilt Brush, if you look at the small print, Google owns the content you create.

“VR is empowerment – getting away from the fixed camera idea.”

McLaughlin: “As an animator, we’re already using the software to tell the stories we want to make and produce the content. It’s definitely about the story and the content that influences the form it takes.”

Maguire presented the panel with questions from the audience.

Mann-Kler: “Where I see the efficacy of VR is when the real world is painful or unbearable. And, if there is a piece of technology there that gives you a choice to dumb that pain down; if that tech can enable you to feel human, to teach you skills that you can use in real life, then that has to be a good thing.”

Morrow: “Why care? The answer is, you don’t have to care. People do things with technology. Who knew the internet would end up in memes and Twitter?

“People watched TV on sets that you had to bang the side of to get the picture clear. People talk about expense of it – working in the film business was incredibly expensive in the 1900s. People always find a way around and through this.

“But it’s the first medium that can make you feel present somewhere else entirely. I don’t believe that will go away at any time in our lifetimes.

“There will be lean-back experiences; people will watch a football game from the best seat. Other times, you’ll play laser tag in a warehouse. All of these things will be there; it will just be something that you do. Children will grow up thinking it’s normal.”

Shaw: “It’s like any medium where people can turn it to any purpose. There will be a time when it’s better than real life and people will want to use it – whether or not you think that’s a good thing, that will happen. I think the role artists can play is to influence how it develops.”

Art goes underground at a new museum in Helsinki

Your body is driving a new wave of AR, VR experiences