VR Reconstruction of Tel-el-Daba, a Puzzle in 4D

The aim of the ‘A Puzzle in 4D’ project is to provide long-term preservation for the rich archaeological resources of the excavations at Tell el Daba in Egypt. Digital and non-digital excavation data will be enriched with metadata and prepared for long-term archiving and open-access online publication.

The overall aim of the A Puzzle in 4D project is the digital long-term preservation of the knowledge and information from the Austrian excavations at Tell el Daba by preparing them for long-term archiving based on national and international standards and in accordance with open-access policies.1 This project is designed as a case study for the development of a repository for archaeological data at the ÖAW ACDH (Austrian Academy of Sciences, Austrian Center for Digital Humanities).

Tell el Daba (TD) is an archaeological site situated in the eastern Nile delta regions of Egypt revealing archaeological evidence from the 12th to 18th dynasties (early second millennium BC)2. Excavations reveal that there was a wealthy society with contacts to many parts of the eastern Mediterranean. A unique connection to Minoan culture has been shown through thousands of fragments of Minoan-style wall paintings discovered in one of the TD palaces, depicting e.g. scenes with bulls and bull-leapers which have become a trademark of the site.

The main motivation for the visualisation of the finds of the TD F/I palace is to share and disseminate the current state of knowledge of existing and reconstructed architectural structures and their interpretation. In order to reach a wider public, it was decided to choose a format suitable for the presentation over the internet, which also allows a presentation of the final content on mobile devices as well as cinematic formats providing image sequences which could be used on and offline. So-called ‘3D Real-time Environments’ and ‘walk–through’ allow users to interact with a 3D environment to discover the reconstructed site on their own pace studying the included archaeological information and experiencing architectural spaces from a first-person view.

In a first glance a Story Map was created to explain the history of the site while displaying the bespoken artifacts, buildings and finds in a geogreferenced view on the map. (link) 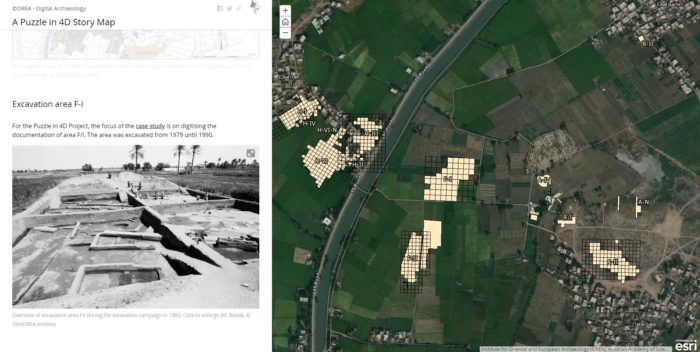 A online -phase model viewer allows accsess to the reconstructed model displaying different steps in time and delivers a textual explaination of the various elements of the building complex. Additional tools like allow to section the model in order to get an inside view of the complex. (link) 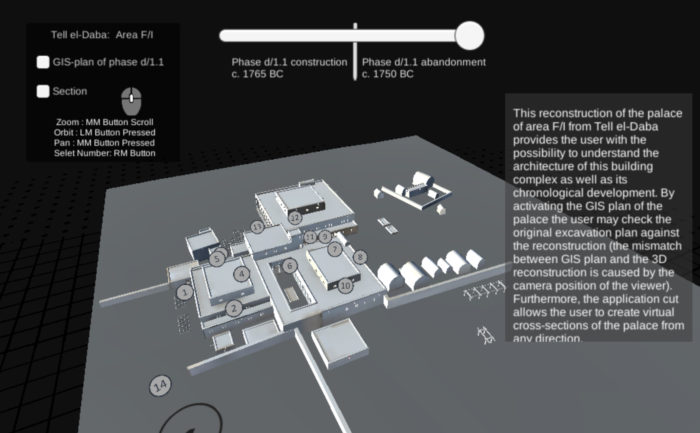 Another online 3d application allows the user to inspect the model from groundview, strawling through the different rooms and gardens of the palace, thus getting the information about rooms and objects while passing them by. A navigational map allows to port the viewer to sensitive locations in the area and take produce a quicker walkthrough. At last one can view the virtual reconstruction from a birds eye view and simulate the yearly flooding of the nile in this area.  (link) 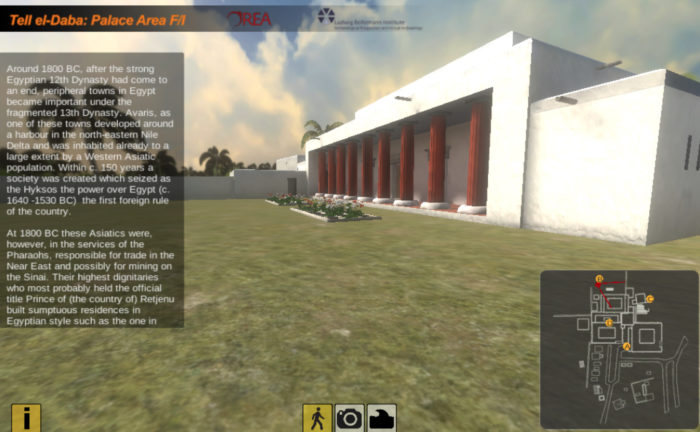 In a summary this reconstruction served as a starting point which will be extendet in the coming years, enriching the application with state of the art technology and implementing the latest research results, keeping it u to date and attractive for the broader public.